This site-related ephemeral landscape consists of one word shaved onto one side of one cow in a herd of 22 animals. As the animal’s hair grew, the poem grew fainter over three months, then disappeared.

Students at the Lycee Agricole du Valentine, and residents from the town of Valence, would contemplate the animals and wait to see the poem.

This work was done in conjunction with a residency at ART3, in Valence France. 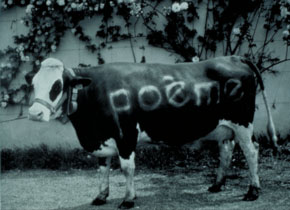 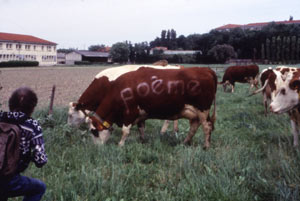 Unnatural Wonders is a series of 25 paper sculptures made from the pages of Unnatural Wonders: Essays on the Gap Between Art and Life by Arthur Danto, a paperback edition published in 2005 by Columbia University Press. Each sculpture made of Danto’s text fragments, is displayed in a specimen-style canister. 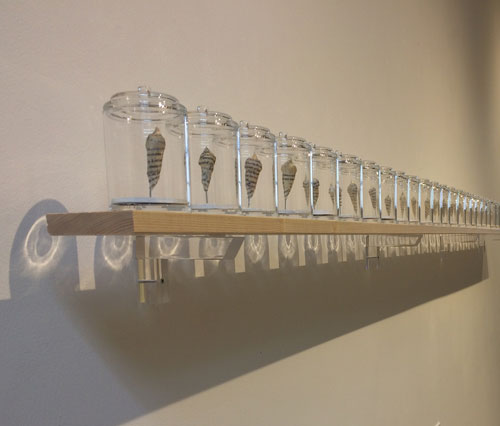 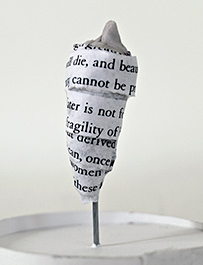 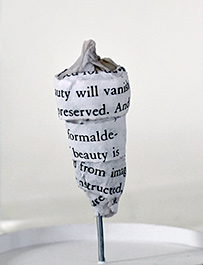 Unnatural specimen, front and back detail. 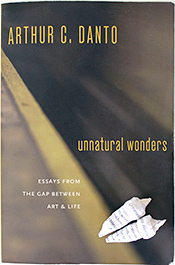 The series reflects Arthur Danto’s idea of contemporary art’s pluralism. He observed that over the span of his career aesthetic considerations are no longer central in the experience and critique of art. Instead artists provide meaning through "unnatural wonders" in a way that contemporary philosophy and religion do not. Acorns, the fruiting bodies of oak, have a low survival rate. 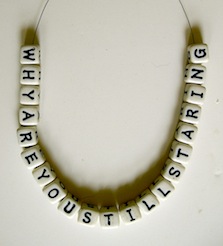 This interactive sculpture consists of two lines of text etched into a hand-cut oval mirror.

The script on mirror reads ‘extraordinary’ at top and ‘pathetic’ below. 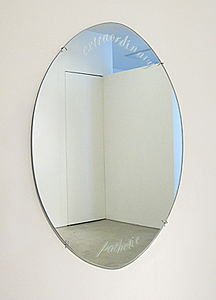 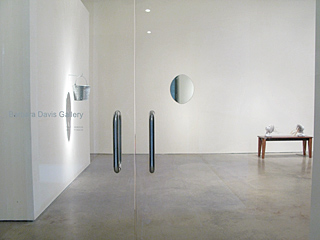 Texts are ‘I’ll never understand you,’ “Why won’t you listen?’ and ‘How can I explain?’ 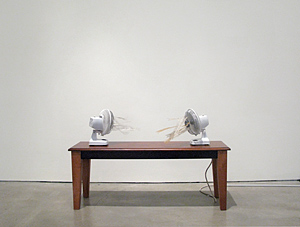 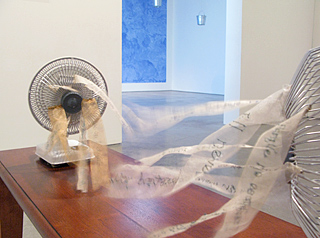 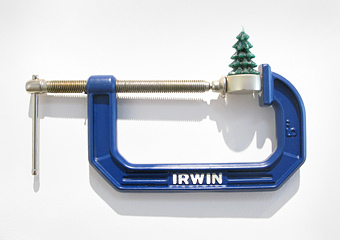 A novelty candle in the form of a Christmas tree pressure-fit into a five” commercial C-clamp.

A commercial clock, set 15 minutes ahead, tells time with an altered face and explores the experience and perception of fame, notoriety and self-consciousness. 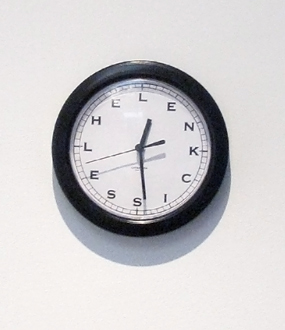 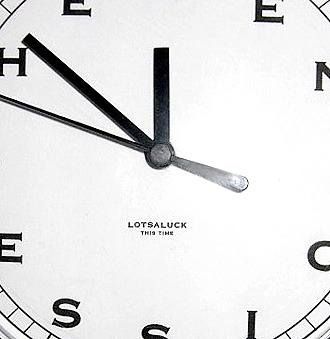 Memento Mori was a time- and site-specific landscape poem with ice and monofilament created in March at the Vermont Studio Center, in Johnson, Vermont.

The word was fashioned from ice cubes threaded on a nylon string. The work lasted for nine days, slowly evanescing directly into the dry air. 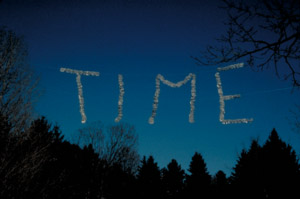 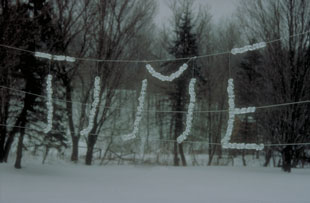 A sculpture with rivets and text on a galvanized bucket is completed with focused light. 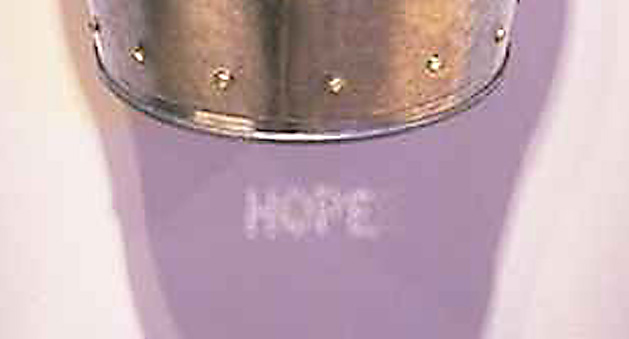 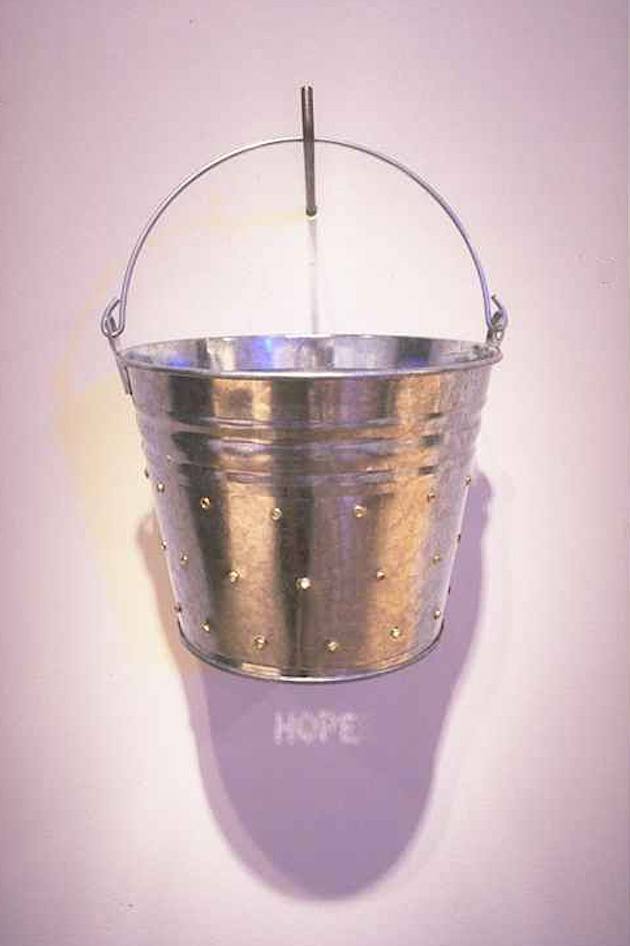 This sculptural artist’s book consists of three commercial meat cleavers etched on both sides with sequential texts and images, and bound together at the handle.

The work rests on a well-used chopping block. Collection of the Sackner Archive for Concrete and Visual Poetry in Miami Beach, FL. 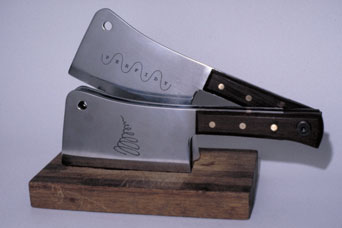 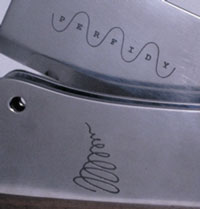 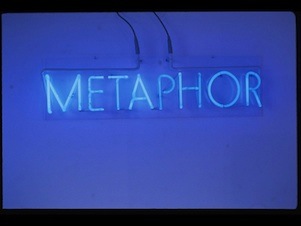 A neon sculpture with automatic timer illuminate the message in 25 second cycles.

In an ephemeral landscape equation, a flock of sheep created mathematical statements through symbols clipped into their fleece. Flock dynamics ensured consistency in this project realized in Beaufort-sur-Gevanne, France. 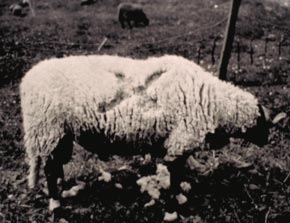 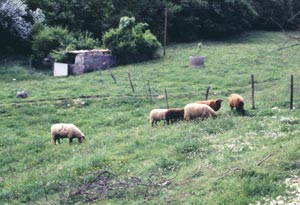 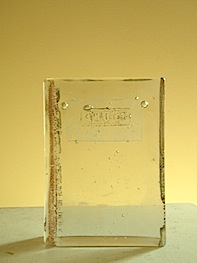